The Civil War Monitor recently published a review of Confederate Soldiers in the American Civil War. Read it here:

I will be presenting my new multimedia program Confederate Soldiers in the American Civil War at the Broad River Genealogical Society meeting Sunday.

The first booksigning with a new book is exciting. It is also stressful. All authors ask themselves “Will the book sell?”

The first signing of Confederate Soldiers in the American Civil War was at Chickamauga & Chattanooga National Military Park. The next day we were at Kennesaw Mountain National Battlefield Park. Both events were successful.  Both parks also had copies of The New Civil War Handbook which also sold well.

Thanks to the Eastern National Bookstore staff and the rangers at both these parks for their help in making both events successful. 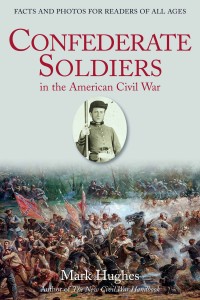 My latest book, Confederate Soldiers of the American Civil War, is being edited. I am making changes suggested by my editor.
Job was right when he said: [ I wish] “that mine adversary had written a book.” Job 31:36 If the Devil was writing a book he would have been too busy to bother Job.
Confederate Soldiers of the American Civil War will be out in May. 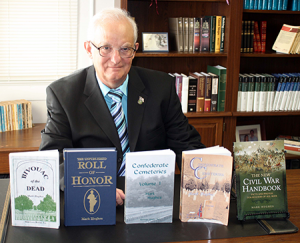 People often ask me why I started writing books about the Civil War. In this article that was recently published in the Kings Mountain Herald reporter Elizabeth Stewart writes about how I got started writing.

One of the women featured in The New Civil War Handbook is Clara Barton. Before she founded the American Red Cross, she nursed wounded Union soldiers on the battlefield. At Antietam, she arrived with 30 lanterns and hundreds of candles so that mortally wounded soldiers would not die in the dark.

To learn more about the role of women in the Civil War, attend my program at the Grover Area Women’s Club meeting on Thursday, November 3, 2016 at 7PM. The meeting will be held in the Grover (NC) Town Hall. The public is invited.

My publisher just informed me that The New Civil War Handbook is now in its 6th printing. The book was released in June 2009. The vast majority of books never have a 2nd printing. It is not too early to order an autographed copy for the history buff on your Christmas gift list. Click here for details.  http://www.civilwarhandbook.com/purchase-a-book/