“That [marking the graves] is not going to happen. It would be too much work.” – Sara Amy Leach – senior historian – Department of Veterans Affairs – 2003

This is a brief summary of the VA’s reasons (excuses) for not marking the graves of the 3,501 American soldiers buried in Salisbury National Cemetery. More details are available on request.

The Secretary [of Veterans Affairs]shall furnish, when requested, appropriate Government headstones or markers at the expense of the United States for the unmarked graves of the following:

(1)  Any individual buried in a national cemetery or in a post cemetery.

(2)  Any individual eligible for burial in a national cemetery (but not buried there), except for those persons or classes of persons enumerated in section 2402 (a)(4), (5), and (6) of this title.

(3) Soldiers of the Union and Confederate Armies of the Civil War.

1st Request – 2003 – That’s too much work.
After several letters and telephone calls to the VA went unanswered Ms. Leach (quoted above) called me.

2nd Request – 2004 – The records don’t exist
After the VA denied my request to mark the graves I asked US Senator Elizabeth Doyle to investigate. Exactly a year later the VA denied my request. This time the VA dispatched a historian to the National Archives. This historian claimed the Roll of Honor (see Timeline of the Prison)) was simply a list of names of prisoners held at Salisbury, not a list of burials. Since the Roll of Honor lists the dates and causes of deaths for all but a handful of prisoners this claim is utterly false. [The VA later admitted the Roll of Honor is a list of soldiers who died at Salisbury.]

3rd Request – 2010 – A Poor Excuse is better than none.
In this request I cited two precedents for marking the graves at Salisbury:

Finding the Hospital Register – 2010
Since the Roll of Honor for Salisbury also listed the cause of death for most of the prisoners I knew the information came from hospital records. However the archivists I spoke with on my prior research trips to the National Archives could not help me locate the hospital register. After the Archives began updating its cataloging system I located the hospital register in August 2010. That should have ended the VA’s excuses. It didn’t.

2010 – 2013 – We Lie to members of Congress too.
After the VA’s 3rd refusal to mark the graves at Salisbury I contacted US Senator Richard Burr and Congressman Patrick McHenry for help. Senator Burr’s military aide contacted the VA several times. Some of the lies the VA told the members of Congress’s aids were:

The “Fact Sheet” – May 2012 – More Misinformation
Over the years a number of people who have relatives buried at Salisbury have contacted me. I always advise them to contact their Congressmen. After members of Congress from several states questioned the VA about the unmarked graves at Salisbury the VA prepared a “Fact Sheet” about Salisbury. This “fact sheet” has numerous omissions and errors.

4th Request 2013 – We don’t care what Federal Law requires.
In my March, 2013, request I pointed out to the VA that Federal Law [38 USC § 2306] requires the VA “upon request” to supply headstones or markers for “Any individual buried in a national cemetery” and Union Soldiers of the Civil War.

In June 2014 (15 months later) Steve Muro, the VA’s Under Secretary for Memorial Affairs, replied to my request: “Although the VA is required statutorily to mark graves in national cemeteries, we can not grant your request… VA finds the existing monument [the monument erected in 1876] at SNC [Salisbury National Cemetery] appropriately marks the site and that we need not provide additional memorization.” 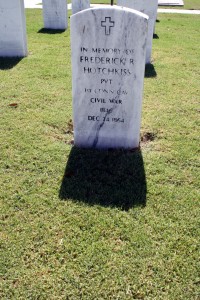 Who in the heck is Hotchkiss? – We Goofed
In my 4th Request I pointed out that the VA had erected a “memorial marker” for Private Frederick Hotchkiss within a few yards of the US Monument. Hotchkiss died at Salisbury on Christmas Eve 1864. The VA “invest aged” and eventually claimed that the marker was erected “in error”. If the VA can erect a marker for one man who died at Salisbury they should be able to properly mark the graves of the rest of the men buried at Salisbury.

5th Request – 2015 – We mark Confederate graves. We don’t mark graves of United States Colored Troops.
I used Compiled Service Records from the National Archives to compile a list of the 44 United States Colored Troops buried at Salisbury. For decades the VA has accepted Compiled Service Records to verify a soldier’s military service before supplying headstones for Civil War Soldiers. I also pointed out more precedents for marking the graves:

The VA denied my request citing the excuse they used in 2014. The VA’s claim that the Confederate POW’s had been inscribed on a monument that was moved elsewhere is invalid. The names on the Confederate monument came from the prison’s hospital register.

The VA never explained why they supplied markers for the Confederate prison guards but not the Inion prisoners who died at Salisbury.